National Education and Religion in the United Kingdom

‘National education’ became a common cry in Europe from the 1760s, and then in the new states in North and South America. In some settings, it’s still employed today. The phrase can be variously read: to imply that the state should take the lead in provision; that education should be provided across the nation, or that it should focus on forming good citizens. Those different missions can be but aren’t always aligned. 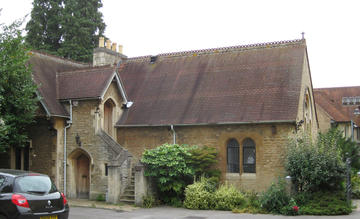 National education isn’t on the face of it a religious programme, but in practice (still today), it entails taking a view on how the state should relate to religious organisations. This is because they have traditionally been major providers of education and had, and have, a stake in it. So, should states try to supersede religious organisations? Or work with them? And if the latter, on what terms?

In the late eighteenth and nineteenth centuries, different parts of the United Kingdom developed different answers to those questions, reflecting their different religious situations – and underlining linkages between these strands of public policy. Controversies about Oxford’s religious identity need to be set in this wider landscape of contention and experiment. 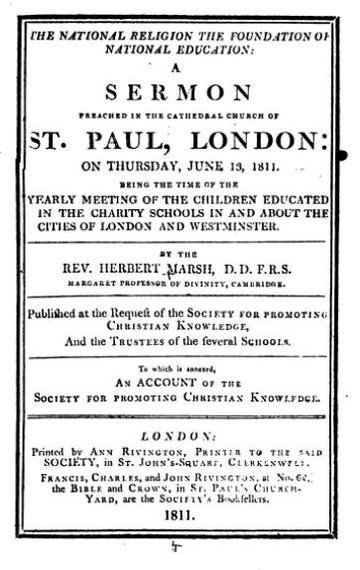 Title page, 'The National Religion the Foundation of National Education: A Sermon' (1811).

In England, some crusading Anglicans tried to commandeer the slogan. National Education, they said, must mean education in the principles of the ‘national Church’, the Church of England. The National Society set up in 1811 to found Church schools today still oversees one in four primary schools. By proceeding under the auspices of a Society, though, Anglicans admitted weakness. Though there were some attempts to get parliament to back Church-led schooling, MPs feared the reaction of non-Anglican voters. Instead, for many decades the government gave grants to rival Church and non-Church societies, later appointing inspectors to safeguard standards. Only in 1870 did parliament authorise rate-funded local schools – and then only in places otherwise unprovided. 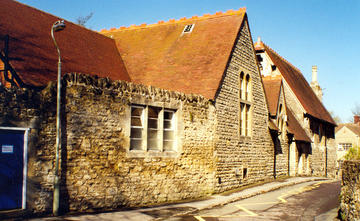 In Scotland, the Church of Scotland was more hegemonic– at least doctrinally, because the country was broadly and increasingly Presbyterian (despite occasional schisms over how rigidly the Church should maintain distance from the state). In 1696, what was then a separate Scottish parliament ruled that all parishes should have a schoolmaster to aid the Presbyterianisation of the country. The Kirk assumed broad oversight. This way of doing things was uncontentious enough to be hailed later as a ‘national’ system. In the era of the Scottish Enlightenment, it was celebrated as a great national achievement. However, the ‘Great Disruption’ of 1843 – the biggest schism to hit the Kirk – led to the founding of hundreds of breakaway Free Church Schools. Parliament then authorised something like the English model: grants to schools, followed, from 1872, by the option to establish public School Boards. 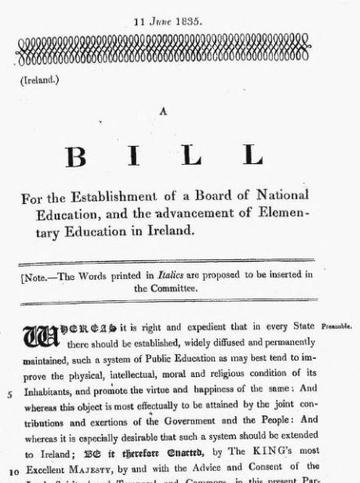 Bill for establishing Board of National Education, and Advance of Elementary Education in Ireland, 1835.

In Ireland, ‘national education’ projects usually emanated from the governing Protestant Ascendancy and reflected their changing ideas about nation-building in a majority Catholic milieu. At first, they aimed to improve education at all levels in order to promote national flourishing, so giving talented Catholics narrow avenues of upwards mobility. It was soon clear that this was far from enough. When the Westminster Parliament initiated an Irish ‘national education’ system in the 1830s (more ambitious than anything then operating in England or Scotland), this was meant to be non-denominational and integrative, though in fact it was bedevilled from the start by the contrasting hopes and fears of different faith communities. An attempt to establish a national university, with four campuses across Ireland, in the 1840s, failed on the same ground.

Controversies over the religious profile and role of Oxford were clearly just the tip of an unstable iceberg. And changes in Oxford in the 1870s also formed one element in a larger pattern of change.

Jo Innes is a Senior Research Fellow at Somerville College and Professor Emeritus of Modern History, University of Oxford. 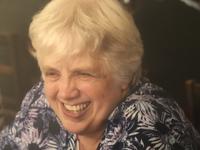